Ephesians 1:5-6 – In love he predestined us for adoption as sons through Jesus Christ, according to the purpose of his will, to the praise of his glorious grace, with which he has blessed us in the Beloved.

In times past, God had chosen one man, Abraham, as the father of the Jewish race [Genesis 12].  God made three distinct promises to Abraham regarding the Jewish nation.  Do you know what they were?

Did you answer correctly?  If so, award yourself a piece of candy!

Now, it is this third promise that we want to consider.  How were the Jews to be a blessing to all the families on earth?  They were to be an example of God’s love to mankind.  They were to exemplify or display God’s provision, his grace, his forgiveness, his great power, his love, etc.  Their relationship with God was to be a living example to all the nations of the earth of the love of God.

The culmination of that love and promised blessing was a savior or messiah, who would be a member of the Jewish race, and who would die for the sins of man.  Through this messiah, ALL men could be freed from the bondage of sin and be restored to a right relationship with God.  Through the savior Jesus Christ, ALL men (not just the Jews) could be adopted as sons and daughters of God.  God had predestined or predetermined to do this in ages past. (Predestine means ‘to set bounds beforehand’, or ‘to predetermine’).  God gave us glimpses of this great plan numerous times through the prophets.  For instance:

Isaiah 49:6  – And he [God] said, It is too small a thing that you [the Messiah] should be my servant to raise up the tribes of Jacob, and to restore the preserved ones of Israel: I will also give you for a light to the Gentiles, that you may be my salvation unto the ends of the earth.

So, we know that from the very beginning, God planned, or intended, or predestined to redeem mankind; to adopt ALL men, Jews and Gentiles alike, as sons and daughters.  This is what Paul refers to when he says “he predestined us for adoption as sons through Jesus Christ”.

This was done ‘according to the purpose of his will’.  In other words, it had nothing to do with any merit on our part.  In times past, God chose the Jews, not because they had any outstanding merit in themselves, but because of the purposes of his will.  In the same way, Gentiles are now called to salvation/adoption as sons of God, not because of any outstanding merits on the part of the Gentiles, but according to God’s will and purpose.

This was a very radical and somewhat controversial idea in the early days of Christianity.  The Jews were convinced that they had exclusive rights to being the sons of God.  Even after Jesus died and was resurrected, they felt it was only for them.  It was extremely difficult for them to embrace the idea that the Gentiles could be admitted into the kingdom of God.  As you recall, God made his intentions crystal clear in Acts 10 when he calls Peter to preach in the house of the Gentile Cornelius.  All the Gentiles in that house were saved, filled with the Holy Spirit and baptized in water.  Peter proclaims:

Acts 10:34-35 Then Peter opened his mouth, and said, of a truth I perceive that God is no respecter of persons:   But in every nation he that fears him, and works righteousness, is accepted with him.

Thus, there can be no stepchildren in the kingdom of God.  All who accept him are equal sons and daughters; all are coheirs with Christ.

Further, Paul tells us that this adoption of all men as sons was done not only according to the purpose of his will, but ‘to the praise of his glorious grace’.  In other words, God is drawing attention to his Divine Grace.  He wants the world to see how rich, how deep, how boundless/abundant his grace is towards all men.  God’s grace knows no limits! All sin can be forgiven!  All can be restored into relationship with Him!  All can experience the depth and love of Christ! All can be filled with the Holy Spirit!

Maybe you are reading this and thinking that you are excluded from that grace for some reason.  I assure you, there are NO exceptions!!  The Bible says:

Romans 8:32 –  He that spared not his own Son, but delivered him up for us all, how shall he not with him also freely give us all things?

My guess is that as you meditate on the vast love God has shown to you personally, by forgiving your sin and adopting you as a son/daughter, you are feeling all warm and fuzzy on the inside, aren’t you?  You are feeling special, aren’t you?  Being one of God’s children along with all its privileges is delightful, isn’t it?  Kind of like a cup of hot chocolate with marshmallows, after you’ve been outside shoveling snow. [If you live someplace warm, maybe it’s like a cold shot of air conditioning after mowing the grass, but I live in Ohio, so for me it’s more like the hot cocoa!]  I want you to hold on to that warm, fuzzy feeling as we take a closer look at how that manifests in our everyday lives.

When we consider that God has chosen to adopt us as sons and daughters, solely by his infinite grace and love (not based on any good within ourselves), what should our reaction be?  PRAISE!

As we mentioned in an earlier lesson, praise is not limited to our mouths or our music.  We also praise God with our actions or conduct. We should be living lives that reflect and display our thanksgiving of God’s glorious grace.

So, since God freely forgave us without strings attached, we need to be forgiving others in the same way.  We are praising him when our conduct reflects his love and mercy!

Uh oh…do I detect a cold silence in the air?  Have you lost the warm fuzzies already?  Do you instantly have the word “but” on your lips?  Please don’t close your browser in my face.  Just hear me out.

I understand that forgiveness is probably the MOST challenging thing that we are called to do.  Some of you reading this have suffered abuse that would make the rest of us vomit.  Some of you have experienced unspeakable loss or a betrayal that reaches to your innermost being.  As far as I can tell, the violence of man knows no limits.  I can never understand what you have endured, but I assure you there is One who knows; our God, the same God who gave his only son for you, knows and understands.  He has healing for you.

Forgiveness does not happen instantaneously or easily, for any of us. However, I believe that when we are willing and when we seek to praise God with our conduct, we can take steps towards forgiveness.

The first step would be to acknowledge that God asks us to forgive others. This is well documented throughout scripture.

Matthew 18:21-22 – Then came Peter to him, and said, Lord, how often shall my brother sin against me, and I forgive him? Till seven times? Jesus said unto him, I say not unto you, until seven times: but, until seventy times seven.

I would encourage you to talk to God in prayer.  Tell him that you know you need to forgive, but you just cannot at this point.  He will lead you as you walk down the path of forgiveness with him. You may benefit from help from a Christian counselor.  Eventually, you will be able to do what seems impossible right now.  Be assured that the Bible also tells us “nothing is impossible with God” Luke 1:37.

For some of you, the problem presents differently.  Some of you, for your part, have forgiven and want to restore a relationship with someone else, but they refuse to do so.  Again, your best action is to go to God in prayer.  Ask him how to give you wisdom.  Pray that you can reflect God’s love and grace to this other person.  God can make restoration of the relationship possible, although patience may be required.

James 1:5 –  If any of you lacks wisdom, let him ask of God, who gives to all men liberally, and reproaches not; and it shall be given him.

Going back to our text, we have seen that God has planned ahead (predestined) for ALL people (Jews and Gentiles) to be adopted into his eternal family as the direct result of his will and loving grace (not according to anything good in us), so that we can reflect his praise (with our mouths and with our conduct).  Paul goes on to say that we have been “blessed in the beloved”.  What does that mean?  It refers to Jesus, the beloved Son of God.  The meaning is that through Jesus the mercies and blessings we have been discussing have been conferred on us.

Ephesians 1:7-10 – In him we have redemption through his blood, the forgiveness of our trespasses, according to the riches of his grace, which he lavished upon us, in all wisdom and insight making known to us the mystery of his will, according to his purpose, which he set forth in Christ, as a plan for the fullness of time, to unite all things in him, things in heaven and things on earth.

The mystery of God’s will is salvation by faith through Jesus, apart from the law.  It was hidden in the law; not clearly seen or understood by those who came before Christ.  But now God has revealed his plan to unite all things in heaven and on earth under the authority of Christ. Aren’t you glad to be a part of that?  The prophets of old desired to know these mysteries, but they were prevented from doing so. From our perspective, we can see all the types, shadows, prophesies and promises have culminated in the person of Jesus, the Messiah!  Let us be thankful for what God has done in the age of grace!

Are you especially thankful for God’s forgiveness? Was there a time when you felt you could never forgive an offence but through the help of Jesus you did it? Please subscribe to our blog and share your comments with us!

One thought on “Ephesians, Lesson #3” 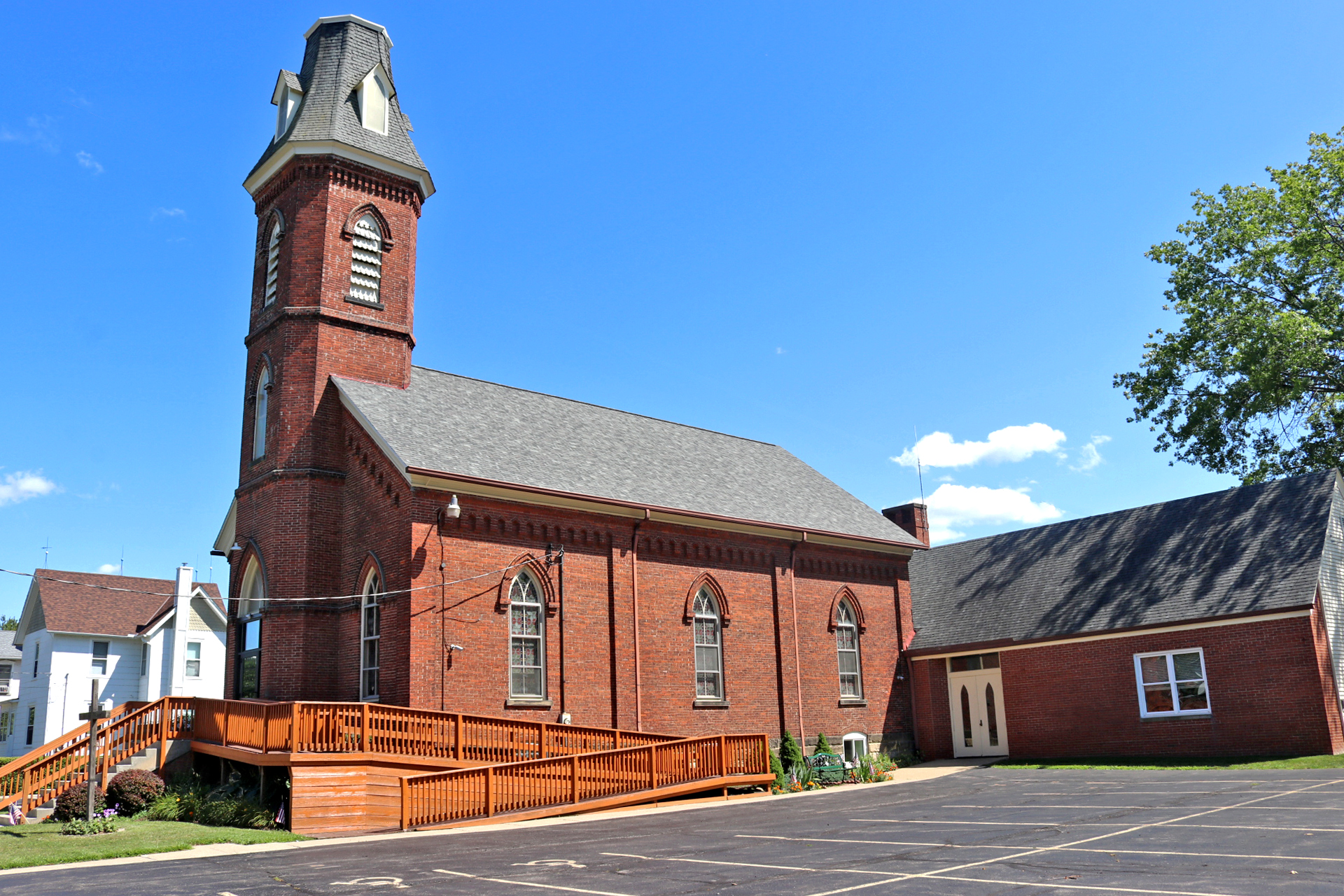